Just How Big Is Our Sun Anyway?

I get that question a bunch when I am doing public out reach for astronomy. When you are dealing with numbers so big, one can lose the scope of things really fast. Your ole buddy Steve T will try to give you an idea of where we stand in the pecking order of size when we consider the the universe.
You are going to find out we are pretty itty bitty in the grand scheme of things.

Let's look at the Earth first. When I am standing atop Mauna Kea,at 14,000 looking out into the distance of the Pacific Ocean, I get a good idea of how big Earth is. The 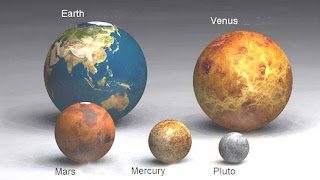 Pacific Ocean fills the view for as far as the eye can see. Perhaps better of an idea is when you are standing atop Pikes peak in Colorado at 14,000 and look east and see the rolling plains stretch out forever.  Turn around and look west only to see endless mountain ridges all the way to the horizon. It does tend to take ones breath away. Of course that could have been the fact I was at 14,000 feet too.

To the common Joe or Joan the earth seems pretty big but when you compare Earth to the other planets you start getting a picture that we are not quite the king of the planets. This diagram above gives one a good comparison of the inner planets of our Solar system and let's throw in Pluto just for fun. Oh yeah! Earth is sitting pretty tall in the saddle in this comparison. 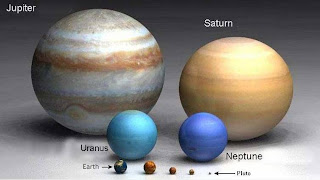 Now let's compare it to the outer planets. Earth is looking kind of puny now! Jupiter dwarfs our little Earth and almost all of the other planets as well. Remember these models are all of the same scale. We are looking at all of the planets in our solar system and yes Pluto too. Easily Jupiter is large and in charge as it would seem.  There is just one more "big" item to compare Jupiter to in the Solar system. 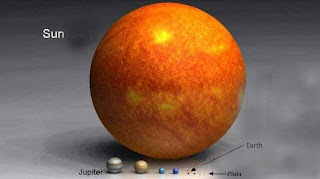 Wow! The sun is huge compared with the those dinky planets; the planets that just a image ago were large and in charge. So now the Sun is the big dog on the block? I would say yes but we are talking about a very small block.

The Sun is a main sequence yellow dwarf star. The Yerkes classification is a G2V. Go tell your teacher or your kids that. That will surely impress them.Well maybe... We seem to be throwing that word dwarf around quite a bit. That should give you a hint about how big our brethren in starland get. Let's take a look so you can get a visual reference. 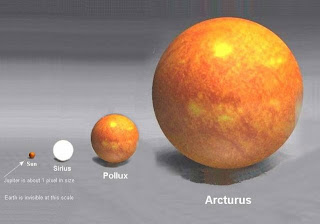 Here we are comparing  our Sun to some main sequence stars. Sirius is a very hot white star. The Sun is starting to look smaller and smaller Try to remember how we (the Earth) looked in comparison  to the Sun. Arcturus is a giant orange star. So Arcturus is the man huh ? Not even in the ball park. As big as Arcturus is here it'll look minuscule in the next image. Are you hanging in there with the scale so far? I think it's time to show you a really big star.

Can you spot Arcturus in the image? It sits right in the middle of the lower row of stars.(the orange one)These super giant stars (top row) are just that, Super Giant. In fact these two stars are near the end of their life cycle. They have burned through most of their hydrogen. Betelgeuse is the big Kahuna? Well not really for there are stars of greater size than the shoulder or Orion (Betelguese)  The Pistol Star comes to mind as well as VY Canis Majoris with VY being the holder of the crown so far.  So now you have an idea of how small we are in the grand scheme of things. Keep in mind that we live in the Milky Way Galaxy which contains some 200/400 billion stars . Now let us add that to the 200 billion or so galaxies out in the universe and Oh my stars we are Itty Bitty!

Clear skies and great seeing too!