Where Did Our Atmosphere Come From? 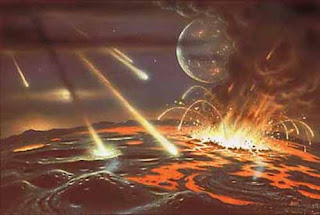 Wow! Now there is a question. I believe we have comets and meteors hitting our planet in the Late Heavy Bombardment(LHB) period to thank for not only our atmosphere but our oceans as well. I just read a paper published in the journal Science that pushes me a long way to believe that is the way it happened. For a long time scientists have known the whole terrestrial planet building process is unfriendly to a planet having an atmosphere like ours.

One theory suggests that our volcanoes were the cause of our atmosphere . (I had a hard time with that from the very start many years ago while in school) While Gasses absolutely do escape our volcanoes, I just never believed that they were sufficient to cause the atmosphere we have today. Dr. Greg Holland and a team of researchers took samples from Volcanic gasses and discovered a strong Meteor marker of Krypton and Xenon in the mix.

The techniques used, enabled the team to measure tiny quantities of the nonreactive volcanic trace gases Krypton and Xenon, which revealed an isotopic 'fingerprint' matching that of meteorites which is different from that of 'solar' gases. The paper goes on to say, From that we now know that the volcanic gases could not have contributed in any significant way to the Earth's atmosphere.

So there we are, left with the hundred dollar question... Where did all this air come from? The best theory for me out there suggests that meteors and comets from the LHB had a great deal to do with it. Water in large quantity and organic molecules are found in comets. The cooler clime of the Oort cloud houses the building blocks of life better than a terrestrial planet so close to the Sun.

I am being convinced that Earth's atmosphere got a jump start from comets. Do I believe that all our water came from comets no... I think through contraction the water vapor etc were out-gassed and thus there was some on the planet to begin with. I am still a chemosynthesis man but with a twist! In light of this new discovery,I would love to hear your competing theory. I believe the whole out-gassing of the mantel and crust to form our atmosphere might have to be rethought. Until next time,

Clear skies and great seeing too